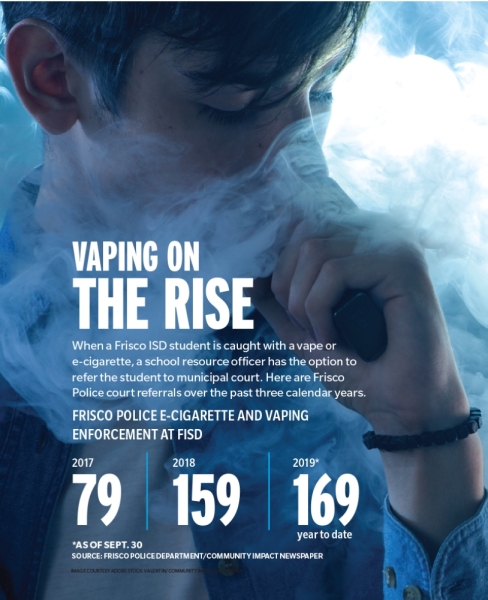 The number of Frisco ISD students receiving court referrals for e-cigarettes and vaping has more than doubled since 2017, prompting FISD to launch a vaping prevention and intervention program this school year.

When a student is caught at school with an e-cigarette or vaping device, school resource officers have the choice to issue court referrals as part of the state disciplinary process.

“This was the thing [school resource officers] said they spent the most time with, overwhelmingly,” Frisco Police Chief David Shilson said.

The Frisco Police Department has tracked court referrals by calendar year. In 2017, FISD school resource officers issued 79 referrals. By 2018, the number more than doubled to 159 referrals.

As of Sept. 30 this calendar year, officers have already issued 169 referrals.

A new Texas law that went into effect Sept. 1 raised the age to purchase and consume nicotine from 18 to 21, making it illegal for most high school students to have nicotine. Prior to the new law, all tobacco products, e-cigarettes and vaping devices were already banned on FISD campuses.

The law was passed in an effort to curb nicotine addiction in young people, said state Sen. Joan Huffman, R-Houston, who authored the legislation. But FISD said it has no information on whether the law is affecting the prevalence of vaping on FISD campuses.

Caldwell said some students do not realize their vapes contain nicotine. In reality, students are consuming a high concentration of the drug, he said.

Shilson said students who then become addicted to nicotine may resort to purchasing substances that are illegal or purchased out-of-state to satisfy their addiction.

While Jansson has not worked directly with FISD, she said neighboring districts, such as McKinney and Anna ISDs, are also showing spikes in student nicotine addiction.

“[Students] don’t feel like it’s a problem,” Jansson said. “Part of the issue is a lack of education, and now we’re trying to play catch-up with educating these students on something they’re well into.”

“We have kids that are addicts,” said Jermaine Galloway, founder of Tall Cop Says Stop, an online resource that provides substance abuse education. “And when you talk addiction, people who are addicted cannot just stop.”

With an 18-year background in law enforcement, Galloway speaks to school districts and police departments across the country. Galloway trained FISD secondary assistant principals about vaping in October and district school board members in November.

He said students need cessation and treatment options to be made available as part of any vaping education program.

Signs of nicotine addiction are similar to those of other drug addictions, Galloway said. They include changes in demeanor, habits and friends, he said.

To tackle the rise in student vaping, FISD implemented Coordinated Approach to Child Health, or CATCH My Breath, a vaping prevention program for students in grades five through 12. The program was developed by researchers at the Michael & Susan Dell Center for Healthy Living.

The district rolled out the first CATCH My Breath lesson covering vaping myths for sixth-12th graders in October, Caldwell said.

Fifth-graders will also receive vaping education in the spring semester to continue the push of prevention efforts before the students begin middle school, Caldwell said.

FISD middle school leaders expressed “the most amount of concern” compared to elementary and high schools, Miller said, because students at that level tend to be most prone to begin vaping.

Lessons about vaping will also be administered periodically throughout the school year. Some topics will include refusal skills and the effects of vaping advertising.

“Parents can’t have the attitude of, ‘My kid wouldn’t do that,’” she said. “I think they need to have the conversation, ask questions, know what to look for.”

Students in FISD’s high school ambassador program were introduced to the CATCH My Breath program over the summer. They told the district that some of their peers were already dealing with nicotine addiction, Caldwell said.

“[The students] thought prevention would be good for middle school,” he said. “But for high school, they wanted information on how to quit.”

Caldwell stressed the importance of letting students know they can turn to school counselors for help.

“We hold them accountable, but we also want to help them,” Caldwell said.

Frisco Police will continue programming with FISD until the number of referrals begins to decline, Shilson said.

“This is not just a Frisco problem,” Shilson said. “This is a national problem. We’re just a part of it.”