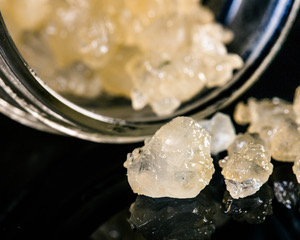 THCA is a product on the legal cannabis market. It is mainly found in legal marijuana dispensaries and has seen increasing in popularity nationwide. The product is known as THCA Crystalline, and is a form of marijuana, that is known on the streets as “diamonds”, “crystals” or “Crystalline”. Visually, this drug does not compare to traditional cannabis, but resembles the look of methamphetamine or cocaine.

If you have attended one of my Tall Cop trainings, you are aware I have been training on this specific drug since 2017. THCA looks like white crystals (see picture), larger crystals or a white, powder- like substance. This drug will not look like traditional cannabis (a loose leaf, bud or herbal substance). Sometimes flavorings or “sauce” from the marijuana plant, also known as terpenes, will be added to the THCA product. When the terpenes are added, the crystals have more of an amber or brown coloring (or off-white crystals). It can be easy to mistake this product as marijuana wax or dabs. THCA is a concentrated form of marijuana but is NOT a traditional dab (please see the Tall Cop Handouts for reference). Although, many users smoke THCA in a similar way to concentrates.

THCA turns into THC when heated, and once heated, the THC content consistently reaches 95-99% THC levels. This product can be smoked out of a bong, also known as an “oil rig,” and / or vaped, as well. As I mentioned earlier, some dispensaries in various states have been selling this product since early 2017. In one case, a user in Washington state said he “adds a couple of ‘rocks’ (referring to Crystalline) to his wax” and it gives him “an incredible high”.