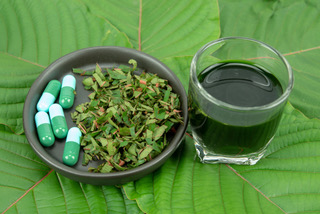 DES MOINES, Iowa — It’s a substance well known to state agencies and quickly making its way into metro communities. Kratom has been on the market for about a decade. In the time since, some users say it’s become even easier to get.

You may have seen the signs around town advertising for kratom. You can buy it at some gas stations, tobacco stores, and even online.

Salsberry lives in Newton, and has used the substance for seven years “for the energy.”

For many the question remains: what is kratom?

Kratom comes from a tropical tree native to Southeast Asia. You can find it in the form of a tablet, capsule, or extract often used for tea.

In small doses it acts like a stimulant. In large doses it’s like a sedative, almost opioid-like.

Salsberry said he’s not addicted to kratom, but it has been life changing for him.

“As a person who treats opioid disorders, I’m seeing people come in who are addicted to kratom,” Dr. Frank Filippelli, medical director and a substance control doctor at UCS Healthcare in West Des Moines, said.

Dr. Filippelli calls kratom a “dangerous drug” and is concerned about how easy Iowans can get their hands on it.

Dr. Filippelli would like to see kratom banned or at least regulated in Iowa. But advocates say the substance isn’t all bad and are pushing for the Kratom Consumer Protection Act, which would keep kratom legal but allow regulators to set requirements like a minimum age use.

Because kratom is not federally regulated, there are some concerns about what’s exactly in the package you buy.

“There are unscrupulous vendors who are spiking it with dangerous substances that make the product dangerous,” Mac Haddow, senior fellow on public policy with the American Kratom Association, said. “We need to clean up this industry so that we make sure that the products are clean, that they’re safe, and that they are properly manufactured so they’re no errors in that process to protect consumers.”

Lack of research has caused challenges as both federal and state officials try to learn more about kratom. The Federal Food and Drug Administration warns people not to use kratom. The Drug Enforcement Agency lists it as a drug of concern.

In Iowa, the substance is legal and unregulated, meaning anyone can buy it and oftentimes in convenient locations.

“You shouldn’t buy your ‘medicine’ where you buy your gasoline and your candy bars,” Jermaine Galloway said.

Previously a law enforcement officer in Idaho, Galloway now looks at drug trends nationwide and educates communities about what to look out for. He said kratom is popular even in states that have banned it, and warns how addictive and misleading it can be.

“Kratom is one of those drugs that a lot of people haven’t heard about and because it’s natural or a plant, people just assume it’s safe,” Galloway said. “And I explain to people, legal or natural does not automatically mean safe.”

Despite those warnings, Salsberry says as long as kratom is being sold he will buy.

“I could live without it, but I don’t really want to,” Salsberry said.

The Iowa Pharmacy Board says it’s monitoring activity at the federal level regarding kratom regulation.

A proposal to ban the substance in the Iowa Legislature failed in 2014.